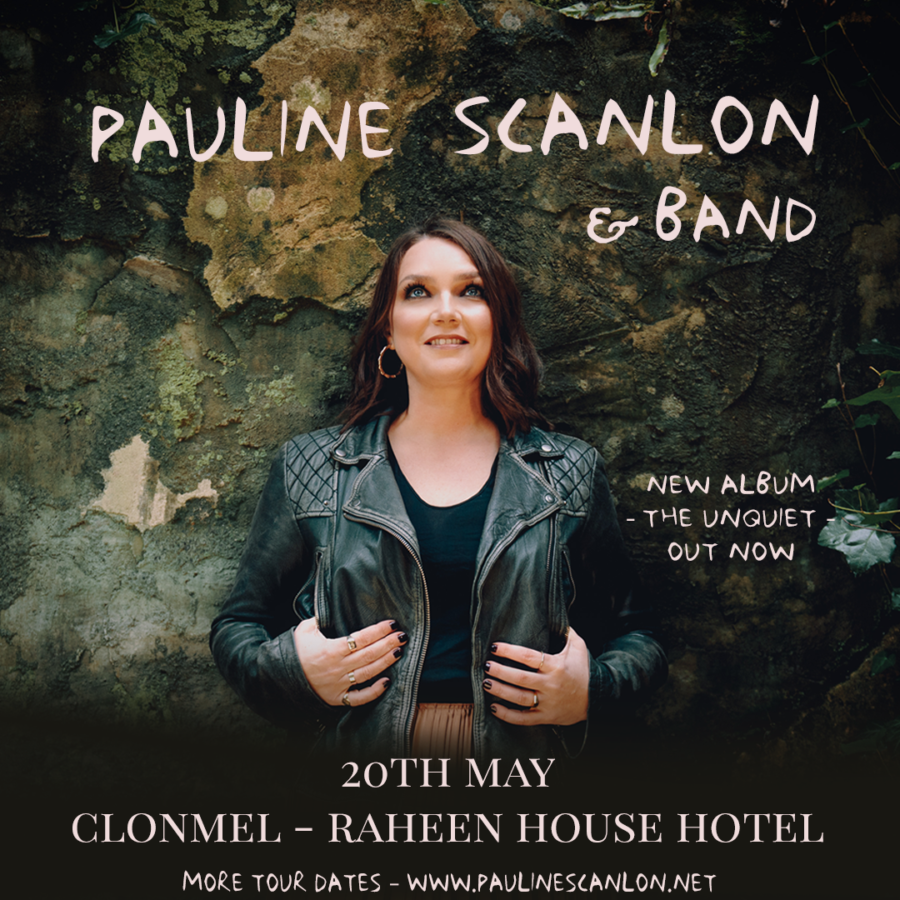 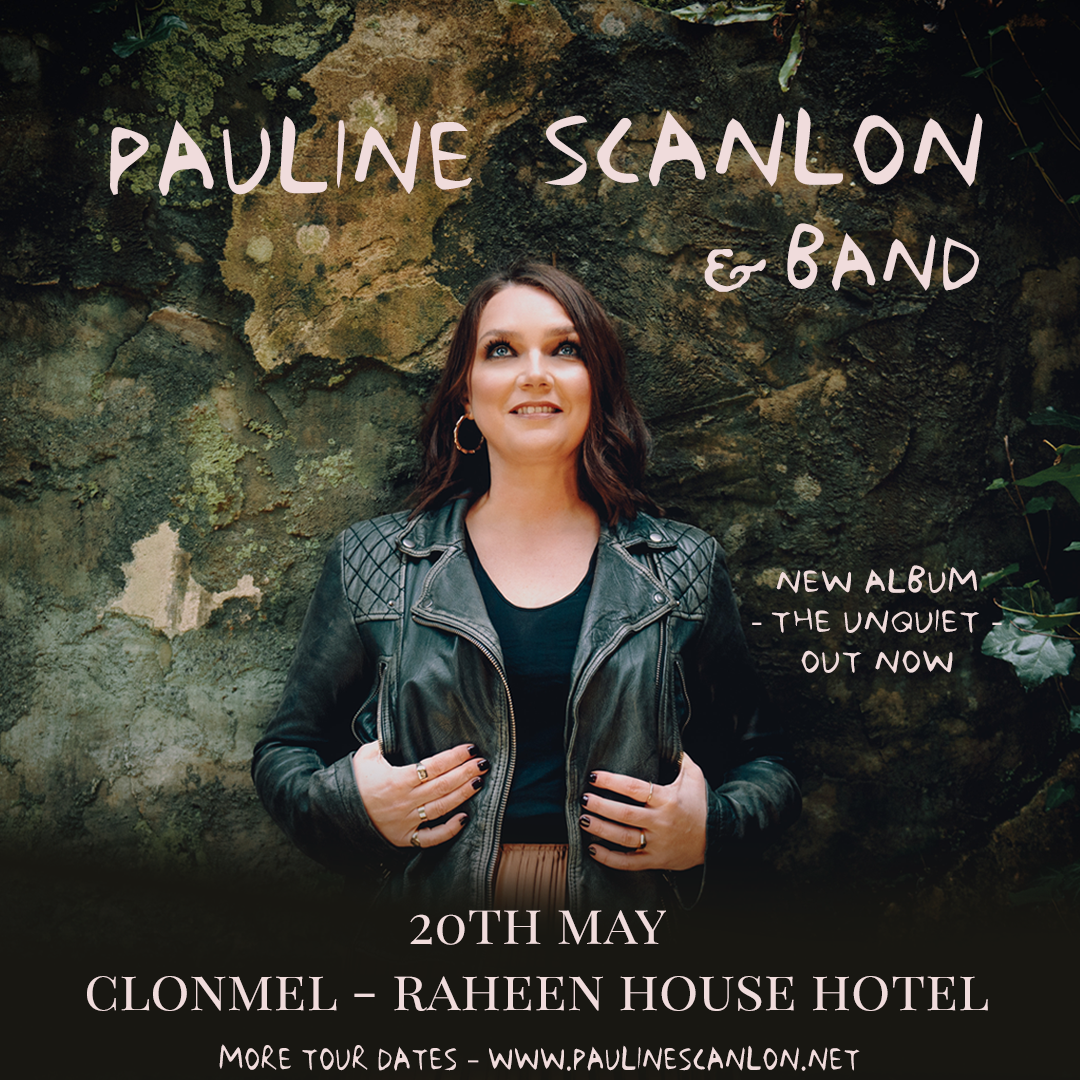 Tickets €22.50 each (including booking fees)

Clonmel World Music is delighted to hold an album launch show for Pauline Scanlon’s fantastic new album. It is the RTE album of the week for April 11th-18th.

On Friday 15th April, RTE Radio 1 broadcast ‘The Unquiet – Songs for my Mother’ – a fascinating radio documentary produced by Elizabeth Laragy, following Pauline Scanlon over three years as she makes her album ‘The Unquiet’.

Pauline Scanlon’s voice comes from an ancient place but is always fresh. She is uniquely Irish yet universally understood, apparently traditional yet subversive at every turn. Perhaps now, it is the steely strength that comes to the fore in both her activism and her determination to constantly evolve as an artist.

As a founding member of FairPlé, the role of women in the arts is central to her creative path and something she is very vocal about and dedicated to. Her new album, The Unquiet,  released in April 2022, is a piece of art possessed of an old soul, but thoroughly modern and of its time.  It is an album that will shift expectations and stand undefined by genre. What makes it so relevant is that it dares to reimagine what it is to be an Irish woman in the context of music and song.

About The Unquiet, her third collaboration with John Reynolds as producer, Scanlon herself says, ‘All my life as a singer, I have been drawn to old songs. In them I find a solidarity with the ghosts of people I have never met and yet share fragments of feelings with.’ Then deliberately turning the narrative of these songs to face the modern era, she says ‘This album is based on the life of my late mother, Eileen Scanlon and her contemporaries in Irish society. The songs have a resonance and a purpose in reflecting her lived experience and that of modern-era women in Ireland, through my perspective.’

Red Colour Sun, her stunning debut, produced by John Reynolds in 2004, announced an original artist immersed in tradition, yet completely aware of the edgier developments within the folk world.

Signed to Sony in 2009 as part of the duo LUMIERE, Scanlon and fellow West Kerry singer, Éilís Kennedy released their self-titled debut in September 2009 to widespread critical acclaim, leading to performances from folk clubs and festivals all over the world to London’s Barbican Theatre and New York’s Carnegie Hall in December 2014.

Bringing her unmistakable vocal style to her second Compass release, Hush was produced by Donogh

Gossamer, her third solo album, again produced by John Reynolds, is an emotionally charged collection of songs, galvanizing her signature style of bringing every song in close and re-creating it for the listener.

Scanlon, although a unique talent, is a constant and generous collaborator. Working with artists such as Damien Dempsey, Sinead O’Connor and many other well-known names, she has featured as harmony vocalist on countless albums. Her current pairing with John Spillane, the latest of many, has delighted audiences around the country with performances of his new album, 100 Snow White Horses. As a collaborator, Scanlon adds a layer of complexity and illumination to the songs she harmonises on. As a solo artist she has entranced audiences all over the world with her distinctive delicate intensity.

Adding television presenting to her skill set, she has fronted several music-based television programmes for both the BBC and TG4 including ‘Ceol Ón gCroí’ a documentary featuring the songs of the 1916 rising, TG4’s live music series, ‘Bosca Ceol’ and a BBC documentary based on her collaboration with NOTIFY, ‘An tÁmhrán Gaeilge’.

Ever curious, she is currently involved in several standout projects.

ATLANTIC ARC ORCHESTRA formed by Scanlon, and under the stewardship of Donal Lunny, features luminaries of folk music such as Aidan O’Rourke of LAU and Ulster piper and singer, Jarlath Henderson

BIRD ON THE WIRE -The Songs of Leonard Cohen, is Scanlon’s most recent collaboration with Galway based band THE WHILEAWAYS, a pre-lockdown project that beat the virus, selling out at every venue in its UK and Irish tours in 2020 and 2021.

The seamless way in which musicians from around the globe connect and blend is something that drives Scanlon as an artist. It’s perhaps this openness on her part that has brought her the gravitas she has earned as a truly original master of song. With voice as her instrument, she takes her place with any instrumental virtuoso of Irish music.

While the word fragile may once have been used to describe her voice, fragile is something Scanlon herself is not. She is a stalwart of the Irish creative music scene, a singer’s singer, a fearless artist who has brought with her all of her experiences and collaborations along the road to her current destination, The Unquiet.

Where the road takes her next, she will tell us in her own way, and in her own time.

Her voice is heavenly, beautifully pure and always deeply connected to the song she’s singing. Songs are her life. She is also a seriously good craic!” – album producer John Reynolds